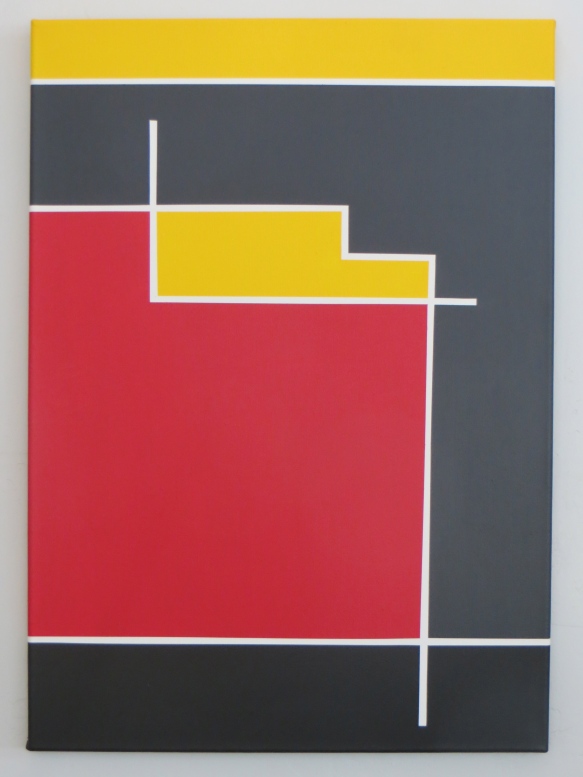 This painting by Serbian-German painter Nina Pops has been hanging on our wall for a month now. It was part of the November exhibition “Querschnitt” at Cologne’s Kulturbunker, for which I wrote an essay. It seems miraculous that the painting has made its way across the Atlantic to Woodland Hills, Utah.

On the back of the canvas the artist has written

This means, I think, that she first sketched this design in her book 10 on the early evening of May 18, 2007 in her apartment in Belgrade. I’ve seen several of her books online. They’re fascinating as a record of ideas — and some of them eventually become paintings. Here, for instance, are some pages from her book #XVIII.

The painting that found its way to us can been seen with several other related paintings under the title “Forms” on the artist’s blog.

The black-and-white “forms” are graphic reminders (as opposed to reminders in graphite, a medium the artist also works in) that Nina Pops’ work is a continuation and elaboration of the work of the great Croatian painter Julije Knifer, whose black-and-white meanders can be found in many of the world’s fine museums (see my discussion here). With Zarko Radakovic, for instance, Nina Pops has created a book of collages composed of manuscript pages from Radakovic’s Knifer book and Pops’ elaborations on and over and around the texts. There are beautiful examples here and my thoughts on the collaboration here.

But back to the painting.

In the short days and long nights of winter, Pops’ yellow and red forms burn bright amidst the thick black forms and thin white lines.

I find my eye trying to recognize the forms. The red one, for instance, reminds me of the shape of the state of Utah. No, I think, the raised section to the upper left is too short and much too skinny and it’s not rectangular Wyoming snuggled in the gap but a narrow yellow rectangle with its own arm (leg?) stretching out to the right.

Then I think of the painting in terms of Paul Klee’s work, like this painting called “Clarification,” for instance:

And, as I’ve already said, I think of it in terms of Knifer’s work.

But why the comparisons? Trying to describe Pops’ large painting “The View” / Pogled, I kept looking for letters of the alphabet (since the painting is of a novel). Why can’t I just see the painting as it is? Why can’t I simply investigate how it works in and on me? A partial answer to that question is that we invariably compare new experiences to what we already know. But if we only do that, how can we experience something new? I’ll try, then, to just look at what is there.

The bright yellow band caps the painting and the same yellow repeats in a fatter and irregular shape below. Black bands dominate the bottom and right and thrust between the yellow forms. The irregular red form is the largest and most forceful shape and color.

I used the words “dominate” and “thrust” for the black forms. Why? Because they threaten me? Threaten me in the winter darkness? Will they feel the same in the summer light? They don’t, however, feel overwhelming. It’s a matter of size, I suppose. And perhaps even more because they are separated and impinged on by the white lines that wrap clear around the sides, breaking up the black into manageable sections, drawing it into question, emphasizing its colorful blackness.

The painting raises expectations of repeated forms — and there are no repeated forms. For instance, the top band suggests the possibility of a bottom strip, but the black form at the bottom is broken by the white line. The top white line makes me look at the bottom white line, which repeats the long horizontal gesture, but the bottom one is broken by the plunging vertical white line. No two forms are the same size, the same width (excluding the white lines, which are indeed all the same width, although they appear thinner and thicker depending on the context), the same shape.

Because of how my eyes work, there are moments at the crossings of the white lines when I can see a grey dot on the juncture.

I’ll look at this painting in the years to come, each time with different eyes and in different light.

I’ll think of it in terms of Wittgenstein’s Traktatus Logico-Philosophicus — because of its logical structure and because it reminds me of its last sentence: “Whereof one cannot speak, thereof one must be silent.”

I received my Ph.D. in German Literature from Princeton University in 1979. Then I taught at Vanderbilt University, BYU, and Utah Valley State College. At Utah Valley University, I directed the Program in Integrated Studies for its initial 13 years and was also Chair of the Department of Humanities and Philosophy for three years. My publications include a book on Freemasonry and the German Novel, two co-authored books with Zarko Radakovic (REPETITIONS and VAMPIRES & A REASONABLE DICTIONARY, published in Serbo-Croatian in Belgrade and in English with Punctum Books), a book with Sam Rushforth (WILD RIDES AND WILDFLOWERS, Torrey House Press), a "fraternal meditation" called IMMORTAL FOR QUITE SOME TIME (University of Utah Press), and translations of three books by Austrian author Peter Handke, of an exhibition catalogue called "The German Army and Genocide," and, with Dan Fairbanks, of Gregor Mendel's important paper on hybridity in peas. More famously, my children are in the process of creating good lives for themselves: as a model and dance/yoga studio manager, as a teacher of Chinese language, as an ecologist and science writer, as a jazz musician, as a parole officer, as a contractor, as a seasonal worker (Alaska and Park City, Utah), and as parents. I share my life with UVU historian Lyn Bennett, with whom I have written a cultural history of barbed wire -- THE PERFECT FENCE (Texas A&M University Press). Some publications at http://works.bepress.com/scott_abbott/
View all posts by Scott Abbott →
This entry was posted in Uncategorized and tagged forms, Julije Knifer, Nina Pops, painting, Paul Klee, Repetitions, Zarko Radakovic. Bookmark the permalink.