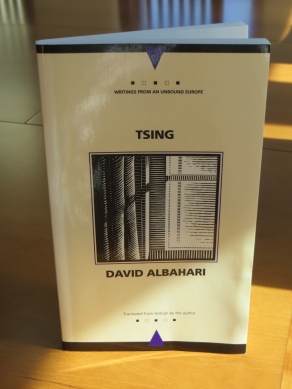 In the tradition of Peter Handke’s Wunschloses Unglück / A Sorrow Beyond Dreams, which is quoted at one point, David Albahari’s Tsing (a novel? a failed biography of his dead father? a set of meditations about writing and memory and loss?) thinks about language, about its adequacies and inadequacies:

These are not even fragments for ‘fragments’ would mean that the story had existed once and that it is broken now, and storytelling would look like a patient act of gluing together. They are not even ‘rips’ for rips would mean that the tissue of a story is now ripped, and through those openings a different reality could be discerned. The story, however, is not given; it has to be gained, to be conquered slowly, slowly. It can never be seen in its eternity, like in the sentence ‘Suddenly I saw it all,’ because the act of writing would become senseless; writing is discovering; movies may copy, photographs catch a bird in flight, but writing is the flight itself. If that is not so, writing is just a waste of time. Writing is not a sheeting hanging between a writer and the world or between the world and reality; story is not an independent being with shapes that suit many people. Story is me. If it does not tell about me, story does not tell about anybody. If it tells about somebody else, it is not a story.

One night six years later [after his father’s death] I took my dog to the backyard. The dog was very old so I had to carry it down the stairs; I let it walk down the last two steps, and the dog disappeared in tangled, neglected grass. . . . The moon pushed its way through the clouds for a moment, and its faint light brought silence back: the pigeons fell silent, the dog stopped somewhere, plants resisted the wind. A strange sound could be heard then, as if two metal points touched, or as if somebody said tsing, quietly, quitely, very quietly, until the final sound ng burned out when the breath ended. . . . The dog died the following evening, and only then did I realize what had awakened me that night in Tel Aviv. It was not my father’s cry — he was silent and began to moan only when I came closer to him — but the same sound, as if somebody had quietly said tsing next to my ear. I remembered suddenly opening my eyes and staring right above me into nothing.

It’s a heartbreaking book, and thus it’s heartwarming as well.

Yesterday I printed a version of my ‘Immortal For Quite Some Time,’ ready to work through it another time, having sent a chapter to an editor at the University of Utah Press, hoping she’ll ask to see the whole manuscript.

This is not a memoir.

The story is uncertain.

The characters are in flux.

The voices are plural.

The photographs are as troubled as the prose.

This is not a memoir.

I received my Ph.D. in German Literature from Princeton University in 1979. Then I taught at Vanderbilt University, BYU, and Utah Valley State College. At Utah Valley University, I directed the Program in Integrated Studies for its initial 13 years and was also Chair of the Department of Humanities and Philosophy for three years. My publications include a book on Freemasonry and the German Novel, two co-authored books with Zarko Radakovic (REPETITIONS and VAMPIRES & A REASONABLE DICTIONARY, published in Serbo-Croatian in Belgrade and in English with Punctum Books), a book with Sam Rushforth (WILD RIDES AND WILDFLOWERS, Torrey House Press), a "fraternal meditation" called IMMORTAL FOR QUITE SOME TIME (University of Utah Press), and translations of three books by Austrian author Peter Handke, of an exhibition catalogue called "The German Army and Genocide," and, with Dan Fairbanks, of Gregor Mendel's important paper on hybridity in peas. More famously, my children are in the process of creating good lives for themselves: as a model and dance/yoga studio manager, as a teacher of Chinese language, as an ecologist and science writer, as a jazz musician, as a parole officer, as a contractor, as a seasonal worker (Alaska and Park City, Utah), and as parents. I share my life with UVU historian Lyn Bennett, with whom I have written a cultural history of barbed wire -- THE PERFECT FENCE (Texas A&M University Press). Some publications at http://works.bepress.com/scott_abbott/
View all posts by Scott Abbott →
This entry was posted in Uncategorized and tagged David Albahari, death, language, Peter Handke, Tsing. Bookmark the permalink.