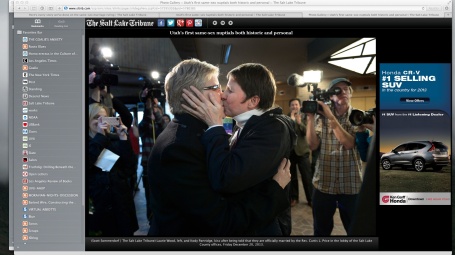 Utah has been the surprising site of unthinkable marriages over the past few weeks.

The photo to the right is of one of the three couples who brought suit against the state for discriminatory practices related to marriage. Laurie Wood, to the left, is my colleague at UVU. Kody Partridge, to the right, is a long-time acquaintance.

The photo is of the celebration immediately after Laurie and Kody were married, not long after the federal court judge ruled that Utah couldn’t deny the benefits of marriage to people based on their sex.

I think it is a beautiful photo.

I wrote Laurie an email to congratulate her—and thank her.

Thank her for all of us, but especially for my brother John. John had no such opportunity. John’s life might have been better, longer, had he lived when discrimination based on sexual preference was declared unconstitutional.

Thinking about the photo of Laurie and Kody, I remember another photo, taken by my sister Christy in the back yard of our home in Farmington, New Mexico.

It is a fuzzy photo, taken quickly with Christy’s little Kodak camera. Jeff stands there, a little boy (he was born the year I left for college), watching.

It is also an unlikely photo. This is Farmington, New Mexico sometime in the 1970’s. This is our backyard. This is John and his lover. This is impossible.

Impossible, of course, in my mind—in the mind of someone who grew up in that red-neck, conservative, Mormon culture.

The photo still makes me uneasy (as does, to tell the truth—and this is an embarrassing truth—the photo of Laurie and Kody).

I grew up the son of mildly racist, strongly homophobic parents. I grew up in Farmington. I grew up Mormon. In my youth, in our town, Civil Rights leaders were seen as Communist pawns. (Laurie Wood is a past president of the Utah ACLU!)

I love my parents. I am proud to have come from Farmington. I am marked, positively for the most part, by my Mormon upbringing.

I wish, however, I hadn’t been taught to hate my own brother.

I received my Ph.D. in German Literature from Princeton University in 1979. Then I taught at Vanderbilt University, BYU, and Utah Valley State College. At Utah Valley University, I directed the Program in Integrated Studies for its initial 13 years and was also Chair of the Department of Humanities and Philosophy for three years. My publications include a book on Freemasonry and the German Novel, two co-authored books with Zarko Radakovic (REPETITIONS and VAMPIRES & A REASONABLE DICTIONARY, published in Serbo-Croatian in Belgrade and in English with Punctum Books), a book with Sam Rushforth (WILD RIDES AND WILDFLOWERS, Torrey House Press), a "fraternal meditation" called IMMORTAL FOR QUITE SOME TIME (University of Utah Press), and translations of three books by Austrian author Peter Handke, of an exhibition catalogue called "The German Army and Genocide," and, with Dan Fairbanks, of Gregor Mendel's important paper on hybridity in peas. More famously, my children are in the process of creating good lives for themselves: as a model and dance/yoga studio manager, as a teacher of Chinese language, as an ecologist and science writer, as a jazz musician, as a parole officer, as a contractor, as a seasonal worker (Alaska and Park City, Utah), and as parents. I share my life with UVU historian Lyn Bennett, with whom I have written a cultural history of barbed wire -- THE PERFECT FENCE (Texas A&M University Press). Some publications at http://works.bepress.com/scott_abbott/
View all posts by Scott Abbott →
This entry was posted in Uncategorized and tagged Farmington New Mexico, gay marriage, John Abbott, Mormons. Bookmark the permalink.