Posted on January 31, 2014 by Scott Abbott
534 WEST 26TH ST
JULIJE KNIFER
FEBRUARY 6 – MARCH 15, 2014
Mitchel-Innes & Nash in New York City is announcing their exhibition of works by Julije Knifer, the first such solo exhibition of his works in the United States. 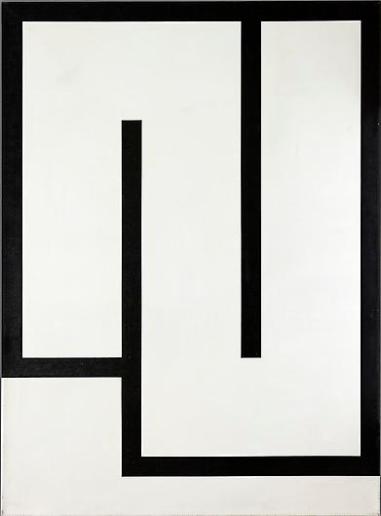 Mitchell-Innes & Nash has a brief and interesting description of Knifer’s work, comparing him to On Kawara (with her ongoing paintings of dates) and with the serialism of Igor Stravinsky. Knifer worked, they write, repetitively and reductively, interested in “escalation of uniformity and monotony.”

The meander was Knifer’s basic form, in all its variations.
And this morning new work by email from Nina Pops. She continues to think through and about and after Knifer (“Knifer is my great passion”), as in this “cutout”: 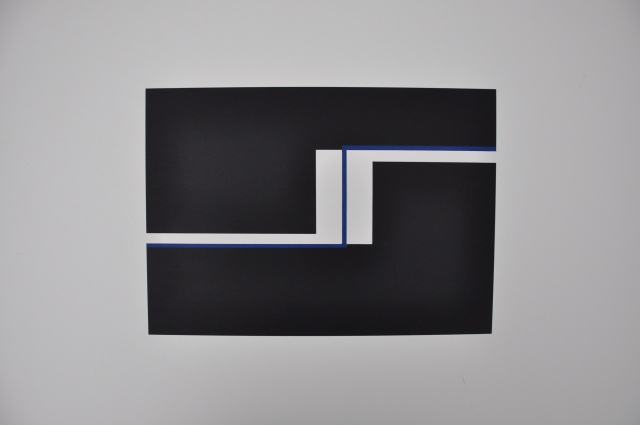 The announcement takes me back to Zarko Radakovic’s book Knifer, and to the page on which he imagines a meander (3 meanders?) in the student center in Zagreb as the gathering in Tübingen of Swiss writer Jürg Beler, Zarko himself (in the center), and me. 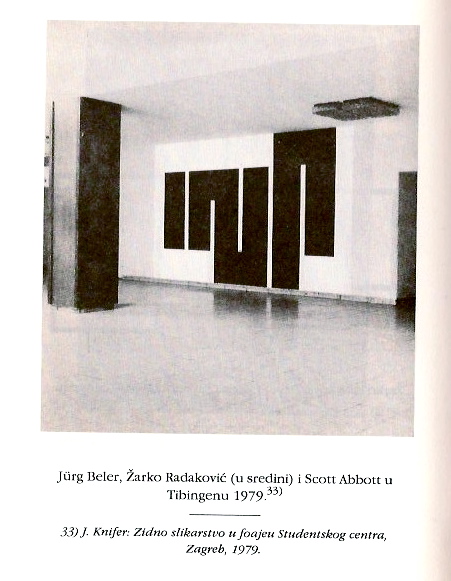 And then I think of a more recent conflation of abstraction and person—Nina Pops’ (Yugoslav/Serb/German) drawings for/of Zarko and me:

And finally memory takes me back to Paris, where Zarko and I visited Knifer (one of his meanders behind us, his dog thinking that perhaps the apercu was less brilliant than Zarko and I took it to be):

. . . . . Zarko emailed this morning to note that Knifer’s dog was named Bina.
. . . . . and a final thought: Zarko’s book about and in response to his dear friend Julije Knifer contains a remarkable collection of photos of Knifer at work in his studio, an intimate look at the painter and his work.

I received my Ph.D. in German Literature from Princeton University in 1979. Then I taught at Vanderbilt University, BYU, and Utah Valley State College. At Utah Valley University, I directed the Program in Integrated Studies for its initial 13 years and was also Chair of the Department of Humanities and Philosophy for three years. My publications include a book on Freemasonry and the German Novel, two co-authored books with Zarko Radakovic (REPETITIONS and VAMPIRES & A REASONABLE DICTIONARY, published in Serbo-Croatian in Belgrade and in English with Punctum Books), a book with Sam Rushforth (WILD RIDES AND WILDFLOWERS, Torrey House Press), a "fraternal meditation" called IMMORTAL FOR QUITE SOME TIME (University of Utah Press), and translations of three books by Austrian author Peter Handke, of an exhibition catalogue called "The German Army and Genocide," and, with Dan Fairbanks, of Gregor Mendel's important paper on hybridity in peas. More famously, my children are in the process of creating good lives for themselves: as a model and dance/yoga studio manager, as a teacher of Chinese language, as an ecologist and science writer, as a jazz musician, as a parole officer, as a contractor, as a seasonal worker (Alaska and Park City, Utah), and as parents. I share my life with UVU historian Lyn Bennett, with whom I have written a cultural history of barbed wire -- THE PERFECT FENCE (Texas A&M University Press). Some publications at http://works.bepress.com/scott_abbott/
View all posts by Scott Abbott →
This entry was posted in Uncategorized and tagged Julije Knifer, Mitchell-Innes & Nash, Nina Pops, Zarko Radakovic. Bookmark the permalink.