The idea of repetition is a recurring one (pun intended). Kierkegaard wrote a book titled Repetition and Robbe-Grillet wrote a novel with that title. Peter Handke’s novel Repetition was a catalyst for the trip I took with Zarko Radakovic into the Austrian/Slovenian landscape of Handke’s novel. We called the book containing our two accounts of that trip Repetitions. In our Wild Rides & Wildflowers: Philosophy and Botany with Bikes, Sam Rushforth and I wrote about our repetitive bike rides on the Great Western Trail in Provo Canyon , figuring that slight changes in the route due to weather and seasons and our own aging would develop a plot in a book without a plot.

In his exhibition that opened Friday night at the Utah Museum of Contemporary Art, Paul Crow shows three works under the title “Here.” All three explore the idea of repetition. 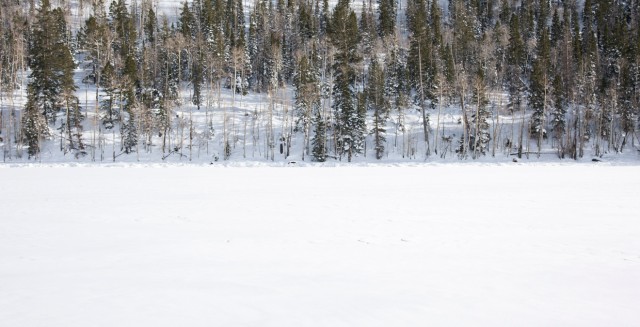 Photographs taken from the frozen bed of Fish Lake in central Utah stretch along one long wall of the exhibition space. The line of photos gives an impression of movement along the lake shore. But as you walk from photo to photo, each one a striking juxtaposition of white, empty space and a busy tangle of evergreens and aspens, you realize that the photographer is moving toward the shore, not along it. The changes in perception are subtle. Your gaze moves back and forth between two photos, between three of them. What has changed? The changes you find delight you, slight as they are. You look more closely than you normally do. You focus again and again. You SEE. You are HERE.

My focus is usually fleeting. The first taste of a meal is noteworthy. The first sip of wine is exploratory. The first exposure to a sunset or to a starry sky or to a shift in the weather makes an impression. But the second taste? The fourth sip? The sky after a few minutes under it?

Paul Crow’s focus is repetitive and refreshing. Each new photo refocuses perception. Each re-presentation is a new work. Each click of the camera is intense. And I, seeing with Crow, through Crow’s lens, am renewed. 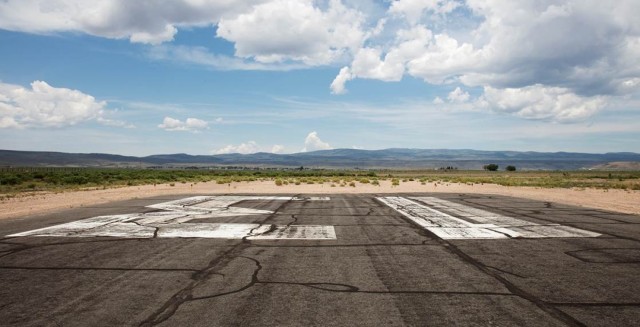 A second series moves from one end of a Wayne County airstrip to another.

I received my Ph.D. in German Literature from Princeton University in 1979. Then I taught at Vanderbilt University, BYU, and Utah Valley State College. At Utah Valley University, I directed the Program in Integrated Studies for its initial 13 years and was also Chair of the Department of Humanities and Philosophy for three years. My publications include a book on Freemasonry and the German Novel, two co-authored books with Zarko Radakovic (REPETITIONS and VAMPIRES & A REASONABLE DICTIONARY, published in Serbo-Croatian in Belgrade and in English with Punctum Books), a book with Sam Rushforth (WILD RIDES AND WILDFLOWERS, Torrey House Press), a "fraternal meditation" called IMMORTAL FOR QUITE SOME TIME (University of Utah Press), and translations of three books by Austrian author Peter Handke, of an exhibition catalogue called "The German Army and Genocide," and, with Dan Fairbanks, of Gregor Mendel's important paper on hybridity in peas. More famously, my children are in the process of creating good lives for themselves: as a model and dance/yoga studio manager, as a teacher of Chinese language, as an ecologist and science writer, as a jazz musician, as a parole officer, as a contractor, as a seasonal worker (Alaska and Park City, Utah), and as parents. I share my life with UVU historian Lyn Bennett, with whom I have written a cultural history of barbed wire -- THE PERFECT FENCE (Texas A&M University Press). Some publications at http://works.bepress.com/scott_abbott/
View all posts by Scott Abbott →
This entry was posted in Uncategorized and tagged Fish Lake Utah, HERE, Kierkegaard, Paul Crow, Peter Handke, Repetition, Repetitions, Robbe-Grillet, Sam Rushforth, Utah Museum of Contemporary Art, Wild Rides and Wildflowers, Zarko Radakovic. Bookmark the permalink.