Last summer I visited my friend Zarko Radakovic in Cologne, Germany. I brought with me a gift for Zarko from my friend Alex Caldiero—Alex’s newest book: 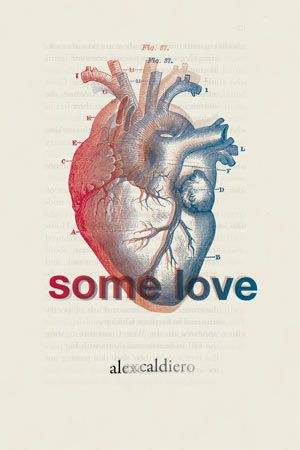 Zarko wanted to reciprocate, but when I suggested that he send Alex a copy of one of his books he noted that Alex couldn’t read Serbo-Croatian. He’ll find a way, I argued, and so Zarko sent his book Strah od Emigracija (Fear of Emigration) home with me: 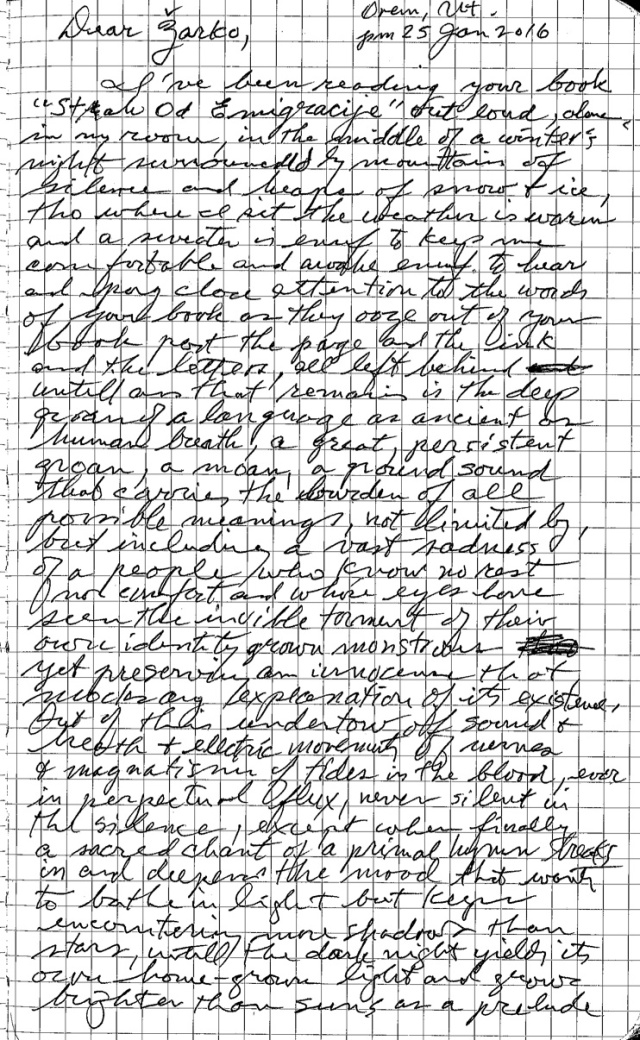 A second page continues this invocation of a language beyond languages, between the languages Zarko and Alex don’t share (Alex knows neither Serbo-Croatian nor German and Zarko knows neither Sicilian nor English—although his understanding of written English never ceases to amaze me).

Alex appended another letter to Zarko:

Dear Zarko, hope this letter finds you well. Want not only to thank you for the book you gave me via Scott….but to tell you that it had a profound effect on me. This is a lot, considering the fact that it is written in a language I do not understand. After I read about 20 pages out-loud, i began to hear your voice and, continuing to lissen to what i was reading, i stopped reading and began to write. I have been at work with an approach to language I call “reading as writing” and so it was no accident that this shift in mode took place. I send you my writing of my reading of some of your book and what that deep lissening opend up for me. Is it translation? Is it original writing? Is it a genre of language all its own? No matter. It is my response and deeply held conviction that the field of language is vaster than our tongues can know. I hope that some time Scott can translate this and  the attached holograph letter. iN any event, It is a record of an exchange for which I AM all the more.

I send you a hug, as ever your friend and brother, Alex

Dear friend Zarko, the gift of your book in a language I don’t understand brings me again to a familiar place. It is a testimony to a fact that never ends for me: that I am and will ever remain, in one-way or another, illiterate. This fact first struck me in 1967, when I was in Rizzoli bookstore in Manhattan. As I was looking thru the poetry section, I ran into a book I could scarcely read. It was only when I mouthed the words several times that my tongue hit on their meaning and I knew suddenly that this was the language I had first drunk at my mother’s breast and spoken all my life but which until that moment that it could be wittiness and t had never read, nor even dreamed that it could be read, no less written, or that it was a door to a whole culture, and the history of a people.  I was illiterate, and could not

read my native language. This was a true moment of enlightenment and joy and beginning of a quest that to this day has given me more sorrow and pain than I could have imagined, given how happy I had been at the start of this piece of knowledge.

from exile to exile, I MAKE LANGUAGE. is language translation? language is translation. language desires to bring across from one side to another, over a bridge, across a sea, from one shore onto another, to transport us.

translator….put me into a trance later…..

The status quo of every reading-interpretation-translation is that we put together what makes sense, out of what we know, what we already understand; and no writing is completely unknown to us, even written in another language, we read and nothing makes sense, and then, out of nowhere, we recognize something, a particle, a section of a word, a phase, a cognate, and so it occurred to me, because I couldn’t do anything about the words I didn’t understand or even hope to approach, that I would ferret out those words or phrases that bore any resemblance to what I already knew. this, as I said, is no different that what is normally done. so there’s nothing strange about doing it under these, at first, unusual circumstances. There is no book that

we cannot read. there is no language that we cannot understand. We create meaning for ourselves constantly. so there we are and here I am, before this book I another language not known to me. and with the above concept in mind, I gain the confidence to read the unintelligible, and make it mean, able to in tell me what there is to tell. this kind of telling is another instance of

reading as writing. Making sense is something we cannot stop. oh if only we could! we are built to create and spawn and generate meaning. the existential loss of meaning is a misnomer or an outright illusion or perhaps a lie. If we suffer, we suffer from too much meaning. One way to curb this penchant for sense is to delve into nonsense and there, at last, we can act out of meanings in relative peace of creation. and realize that in the beginning was the word, and the word moved over the chaos and stirred the shapeless mass of being and therein the word began to speak and be in and bring forth each thing and every thing and it was all so very good.

Zarko responded quickly with an email he asked me to translate for Alex:

Your words are so important to me, so near. And Alex, this human being, is for me like a god-figure from the best ancient times. I will never forget how, that morning in your house, we spoke so intimately, as if we had known one another for 5000 years.

I greet you both. Dearest greetings

And I ask myself: how is it that friendships last over decades, that they span the ocean and bridge languages, that they are the precious stuff of life? There is no answer. Only gratitude.

I received my Ph.D. in German Literature from Princeton University in 1979. Then I taught at Vanderbilt University, BYU, and Utah Valley State College. At Utah Valley University, I directed the Program in Integrated Studies for its initial 13 years and was also Chair of the Department of Humanities and Philosophy for three years. My publications include a book on Freemasonry and the German Novel, two co-authored books with Zarko Radakovic (REPETITIONS and VAMPIRES & A REASONABLE DICTIONARY, published in Serbo-Croatian in Belgrade and in English with Punctum Books), a book with Sam Rushforth (WILD RIDES AND WILDFLOWERS, Torrey House Press), a "fraternal meditation" called IMMORTAL FOR QUITE SOME TIME (University of Utah Press), and translations of three books by Austrian author Peter Handke, of an exhibition catalogue called "The German Army and Genocide," and, with Dan Fairbanks, of Gregor Mendel's important paper on hybridity in peas. More famously, my children are in the process of creating good lives for themselves: as a model and dance/yoga studio manager, as a teacher of Chinese language, as an ecologist and science writer, as a jazz musician, as a parole officer, as a contractor, as a seasonal worker (Alaska and Park City, Utah), and as parents. I share my life with UVU historian Lyn Bennett, with whom I have written a cultural history of barbed wire -- THE PERFECT FENCE (Texas A&M University Press). Some publications at http://works.bepress.com/scott_abbott/
View all posts by Scott Abbott →
This entry was posted in Uncategorized and tagged Alex Caldiero, friendship, languages, Some Love, Strah od Emigracije, Zarko Radakovic. Bookmark the permalink.

1 Response to Translating the Untranslatable