“Bucket of Tits”: A Labor Day Story from IMMORTAL FOR QUITE SOME TIME

Combing my hair after a shower, I finger a thick scar on my forehead and remember a summer’s night on a drilling site between cotton fields outside Eloy, Arizona.

A pump had lost pressure because of worn gaskets, and we were replacing them. Sweat burned my eyes and dripped off my nose and chin as I wielded a thirty-six-inch pipe wrench to back out a heavy steel shaft. The third time my hard hat slid off, I threw it aside, grateful for the slight breeze in my hair. An hour later, the gaskets replaced, the shafts screwed back into place, Rudy signaled for Howard to switch the pump back on line.

Scott! I heard someone say. Are you all right? I was lying on the ground with three faces hanging over me in the floodlit night. When I tried to sit up, my brain threatened another shutdown. Where’s your goddamned hard hat? Howard muttered. I put my hand to my head. It came away slick with blood.

On the way to the Casa Grande hospital, holding a wet rag to my head, I asked what happened. A brass fitting broke when I kicked in the compressed air, Howard said. It swung around on its hose and knocked you on your ass. The only time you’ve had your hat off in two months. With that kind of luck, if you fell into a bucket of tits you’d come up sucking your thumb.

A doctor cleaned me up, stitched the wound, and said he wanted to keep me there for observation. Howard asked to talk with me for a minute, and the doctor left. In two and a half more weeks, Howard explained, I’ll have enough accident-free hours with my crew to get a paid Caribbean vacation. If you check into the hospital or if you don’t show up to work tomorrow night, I’ll lose that.

The doctor returned, and I said I just wanted to go home. I can’t allow that, he said. You have a concussion. I asked if I could stay without checking in. The doctor spoke with a nurse, and she made a bed for me on a lobby couch. At the rig the next day, my hard hat teetered precariously on a fat bandage. 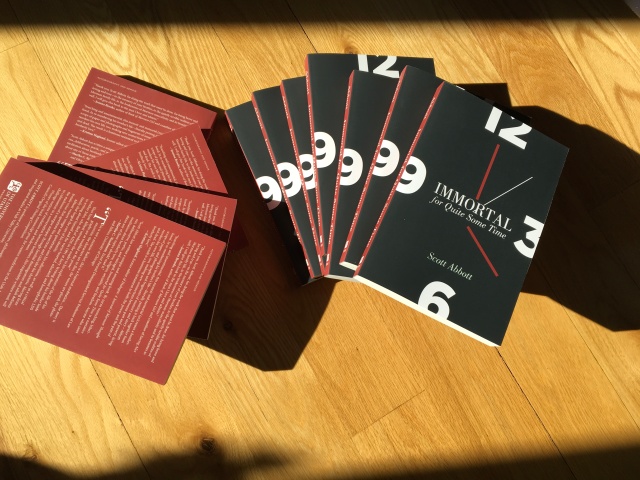 I received my Ph.D. in German Literature from Princeton University in 1979. Then I taught at Vanderbilt University, BYU, and Utah Valley State College. At Utah Valley University, I directed the Program in Integrated Studies for its initial 13 years and was also Chair of the Department of Humanities and Philosophy for three years. My publications include a book on Freemasonry and the German Novel, two co-authored books with Zarko Radakovic (REPETITIONS and VAMPIRES & A REASONABLE DICTIONARY, published in Serbo-Croatian in Belgrade and in English with Punctum Books), a book with Sam Rushforth (WILD RIDES AND WILDFLOWERS, Torrey House Press), a "fraternal meditation" called IMMORTAL FOR QUITE SOME TIME (University of Utah Press), and translations of three books by Austrian author Peter Handke, of an exhibition catalogue called "The German Army and Genocide," and, with Dan Fairbanks, of Gregor Mendel's important paper on hybridity in peas. More famously, my children are in the process of creating good lives for themselves: as a model and dance/yoga studio manager, as a teacher of Chinese language, as an ecologist and science writer, as a jazz musician, as a parole officer, as a contractor, as a seasonal worker (Alaska and Park City, Utah), and as parents. I share my life with UVU historian Lyn Bennett, with whom I have written a cultural history of barbed wire -- THE PERFECT FENCE (Texas A&M University Press). Some publications at http://works.bepress.com/scott_abbott/
View all posts by Scott Abbott →
This entry was posted in Uncategorized and tagged bucket of tits, concussion, hard hat, Immortal For Quite Some Time, Labor Day. Bookmark the permalink.

3 Responses to “Bucket of Tits”: A Labor Day Story from IMMORTAL FOR QUITE SOME TIME