For Utah’s Arts Magazine, 15 Bytes, I wrote about Alex’s chapbooks, about the idea of his chapbooks. See that essay HERE. I’m now the fortunate recipient of three more in the remarkable series.

The first page of the first notebook: 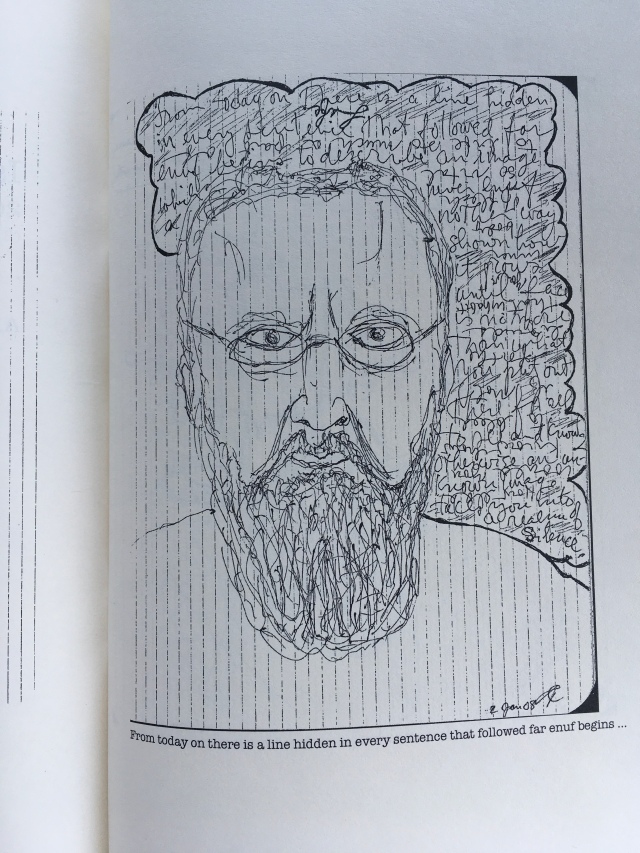 The author looks out at the reader through glasses, surrounded by hair and enveloped by  words that read:

From today on there is a line hidden in every sentence that followed far enuf begins to describe an image which never enuf another way shown how it grows until face is no more than what you put out there for all to see and know otherwise an unknown image takes you into a realm of silence.

… and, reading from below and upside down:

How else could you know how to bleed if not for the liquids that inhabit your inner body of flesh so vital to life so much a part of Life.

Like much of Alex’s work (all of his work?), this image/text explores the border of what can be said and what cannot be said, what we can know and what we so fervently wish we could know. The first sentence promises hidden knowledge, perhaps the knowledge hidden in the intervening and inverted lines. The sentence begins to describe an image that is, perhaps, knowledge beyond words but that in the words that make up the lines falters syntactically (“which never enuf another way shown how it grows”). We end up back at the image put out there for all to see because “an unknown image takes you into a realm of silence.”

A couple of pages later Alex thinks again about images and knowledge:

Mysticism is always, wonderfully circular. Truth is a mobile army of metaphors, a truth Alex will quickly deny.

Another poem — from the second volume with the cyclops on the cover — references the island the books called “Island Soul” speak of:

Dream of the cyclops & of

the boulders & sea — who

am I that I should be

re-telling this to you?

Certainly no Odysseus — no

one who is resourceful or

Because I’ve been reading a lot about German Romanticism for a course I’ll teach this fall, it’s inevitable that I hear, in Alex’s non-heroic odyssey, echoes of Novalis:

Where, then, are we going? We’re always going home.

Another poem from the volume returns to Heimweh / homesickness: 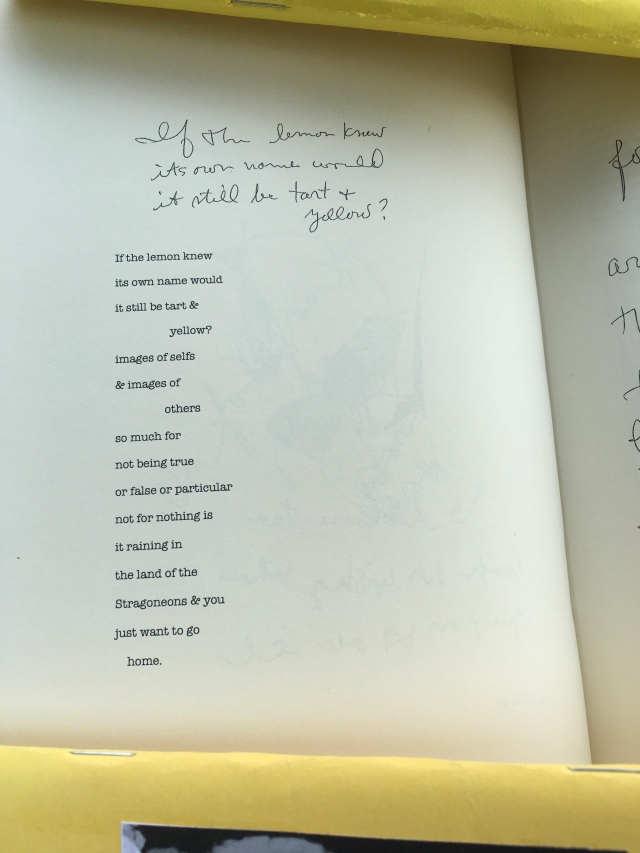 Home is where names and images give way to taste and color.

The truth, the root, the wound, the never ending waking moment. This mystic of the Romantic persuasion finds not his soul but “only me again.” Still, the search, the struggle, and the effort move and expand the soul.

Whither the secret path? Always inward.

Novalis again. And, continuing the Romantic quest, there is the fragment so critical in the thought of Friedrich Schlegel and Novalis and, it turns out, Caldiero:

The fragment holds what the whole can never contain by virtue of its fragmentary nature to include by implication all that it is not.

The third volume of the triptych is a record of lost and found and in the process hidden records (the damage done by a washing machine). I love what it promises, what it veils, what it reveals through its fragmentary nature. Islands of thought.

I received my Ph.D. in German Literature from Princeton University in 1979. Then I taught at Vanderbilt University, BYU, and Utah Valley State College. At Utah Valley University, I directed the Program in Integrated Studies for its initial 13 years and was also Chair of the Department of Humanities and Philosophy for three years. My publications include a book on Freemasonry and the German Novel, two co-authored books with Zarko Radakovic (REPETITIONS and VAMPIRES & A REASONABLE DICTIONARY, published in Serbo-Croatian in Belgrade and in English with Punctum Books), a book with Sam Rushforth (WILD RIDES AND WILDFLOWERS, Torrey House Press), a "fraternal meditation" called IMMORTAL FOR QUITE SOME TIME (University of Utah Press), and translations of three books by Austrian author Peter Handke, of an exhibition catalogue called "The German Army and Genocide," and, with Dan Fairbanks, of Gregor Mendel's important paper on hybridity in peas. More famously, my children are in the process of creating good lives for themselves: as a model and dance/yoga studio manager, as a teacher of Chinese language, as an ecologist and science writer, as a jazz musician, as a parole officer, as a contractor, as a seasonal worker (Alaska and Park City, Utah), and as parents. I share my life with UVU historian Lyn Bennett, with whom I have written a cultural history of barbed wire -- THE PERFECT FENCE (Texas A&M University Press). Some publications at http://works.bepress.com/scott_abbott/
View all posts by Scott Abbott →
This entry was posted in Uncategorized and tagged Alex Caldiero, German Romantics, image, Island Soul, knowledge, Novalis, Sicilian flag, the fragment. Bookmark the permalink.