A Walk with Frank

A couple of weeks ago Sam Rushforth handed me his red hat. For you, he said.

That’s your favorite hat, I said.

Part of my ongoing attempt to keep you from looking like a total dork, he said.

A couple of days ago Sam sent this email:

Hey, Abbott. There is one person in the world I would give my red hat to — you! Do you love it? Do you wear it? If so, I am thrilled. If it is mediocre to you, I want the sumbich back! I am giving away some of my best things to just a few people — you included with a true gem. So love it or give it back!!!

I already have a new band of dried sweat on it…it’s a gem. There’s only one person in the world from whom I would accept a red hat. And you’re it.

Ok. You can keep the sumbich. I have moved on to the torn Cal Arts hat. Nan is gonna patch the hole with white cross-stitch so it will look swell! Sooo happy you like the red hat!

That Cal Arts hat was the one Sam was wearing when he had his great crash. If you’re interested in the whole story, read Sam’s and my book, Wild Rides & Wildflowers: Philosophy and Botany with Bikes. For more than a decade we rode our mountain bikes up and down the Great Western Trail, a section of the trail we called “Frank,” noting the changing flora and fauna and celebrating the ways our bikes got us into Nature day after day. There were plenty of falls and abundant, related profanity. We had a ball.

Today, I thought I would take Sam’s red hat that accompanied us on our bike rides on a walk. In honor of past events, I decided to call the hat Frank. Here some pictures from our walk:

Frank and I as we walked down the hill from our house in Woodland Hills, a barbed wire fence in the background. If you’re interested in barbed wire, read Lyn’s and my book The Perfect Fence: Untangling the Meanings of Barbed Wire.

We looked down from the canal road to the Salem Cemetery. Memento mori, Frank said.

How the crops get irrigated, I explained to Frank.

Bet this is where hamburgers are born, Frank said. Aren’t you a vegetarian? I asked Frank. Yes, he answered, and this is why. 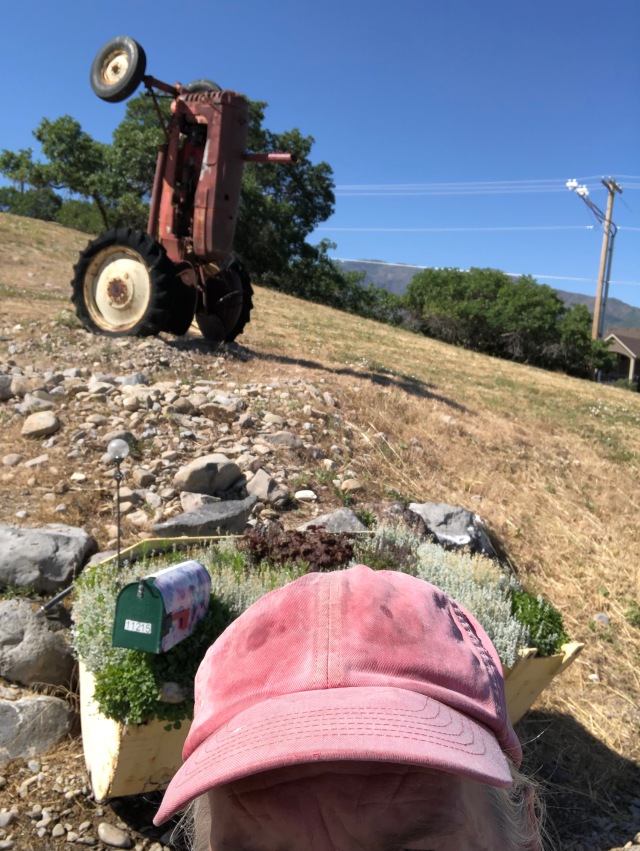 This for my book on the metaphor of standing, I explained to Frank. Homo erectus in the Culture of Homo sapiens.

Frank, I said — ever the professor — this is a prime example of Veblen’s idea of conspicuous consumption.

Maybe we should start a church, Frank said, and only require 5% of people’s income. We could build better buildings, I bet.

Off road and halfway up a steep slope marked only by deer and elk trails, I apologized to Frank for the gathering sweat and asked him to pose on the remnants of a fallen fence. He’s an accommodating fellow.

We made it to the top of that stretch and I asked Frank if we could take a little break. I’m not used to breaks, walking with Sam, he said, but I can tell you’re a little winded, so okay.

Frank didn’t believe me when I told him I rode my bike to the top of that pointed peak with the microwave tower on the top. Twice. You and Sam are blood brothers, he said, when it comes to hyperbole. You know words like hyperbole? I exclaimed.

Santaquin Peak, I told Frank. Big wildfire there last September. That’s when Lyn and I and Bella were evacuated and came to stay with you and Cedar and Nancy and Sam. 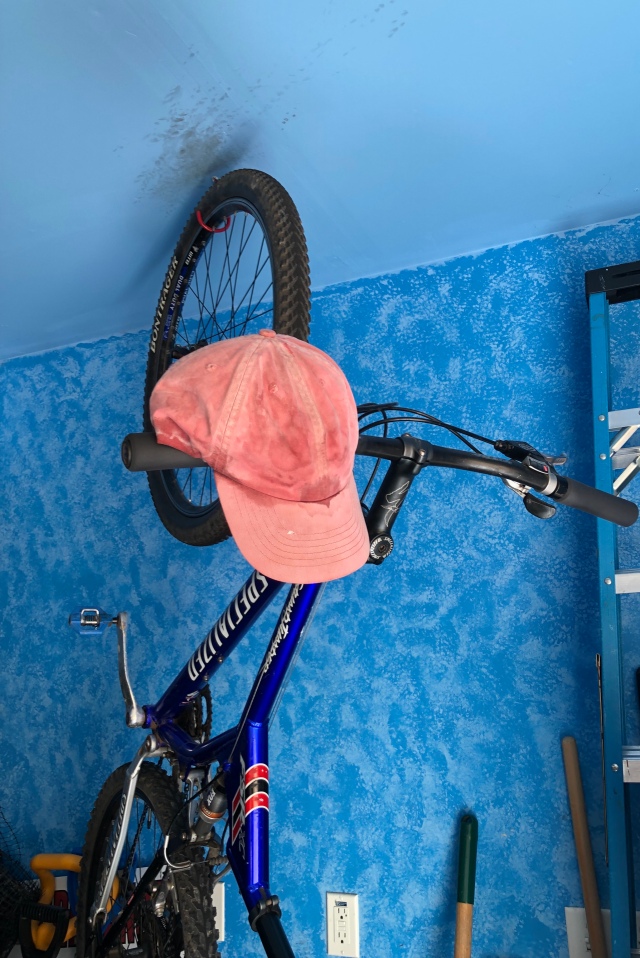 Home again, Frank asked to dry on my old bike, claimed he remembered it from earlier rides on the Great Western.

I received my Ph.D. in German Literature from Princeton University in 1979. Then I taught at Vanderbilt University, BYU, and Utah Valley State College. At Utah Valley University, I directed the Program in Integrated Studies for its initial 13 years and was also Chair of the Department of Humanities and Philosophy for three years. My publications include a book on Freemasonry and the German Novel, two co-authored books with Zarko Radakovic (REPETITIONS and VAMPIRES & A REASONABLE DICTIONARY, published in Serbo-Croatian in Belgrade and in English with Punctum Books), a book with Sam Rushforth (WILD RIDES AND WILDFLOWERS, Torrey House Press), a "fraternal meditation" called IMMORTAL FOR QUITE SOME TIME (University of Utah Press), and translations of three books by Austrian author Peter Handke, of an exhibition catalogue called "The German Army and Genocide," and, with Dan Fairbanks, of Gregor Mendel's important paper on hybridity in peas. More famously, my children are in the process of creating good lives for themselves: as a model and dance/yoga studio manager, as a teacher of Chinese language, as an ecologist and science writer, as a jazz musician, as a parole officer, as a contractor, as a seasonal worker (Alaska and Park City, Utah), and as parents. I share my life with UVU historian Lyn Bennett, with whom I have written a cultural history of barbed wire -- THE PERFECT FENCE (Texas A&M University Press). Some publications at http://works.bepress.com/scott_abbott/
View all posts by Scott Abbott →
This entry was posted in Uncategorized and tagged Great Western Trail, mountain bikes, red hat, Sam Rushforth, Woodland Hills Utah. Bookmark the permalink.

10 Responses to A Walk with Frank