A beautiful new book of Peter Handke’s drawings arrived in the mail this week. 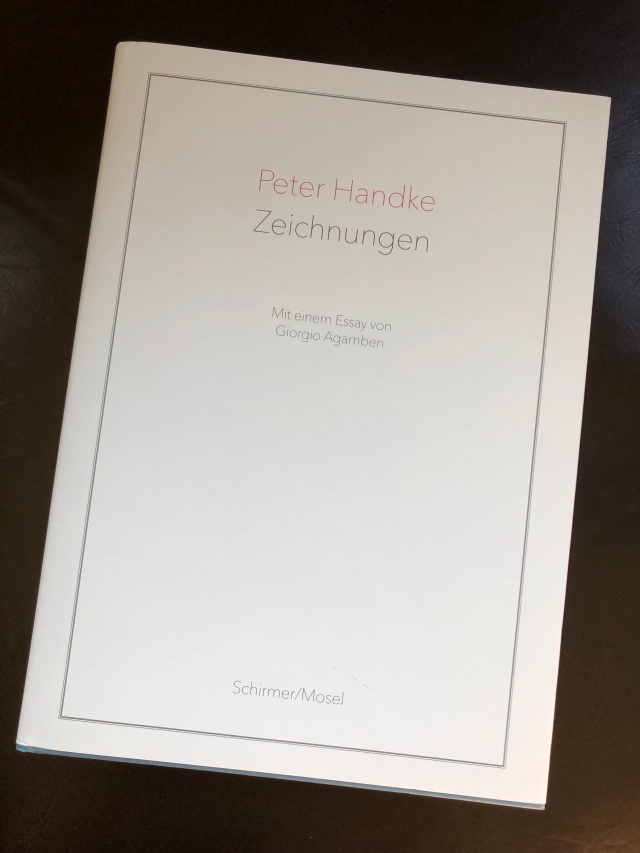 The drawings are from his notebooks, most of them small, all of them of things he sees while walking or traveling. They are visual notes, like the literal notes that also crowd the notebook pages. 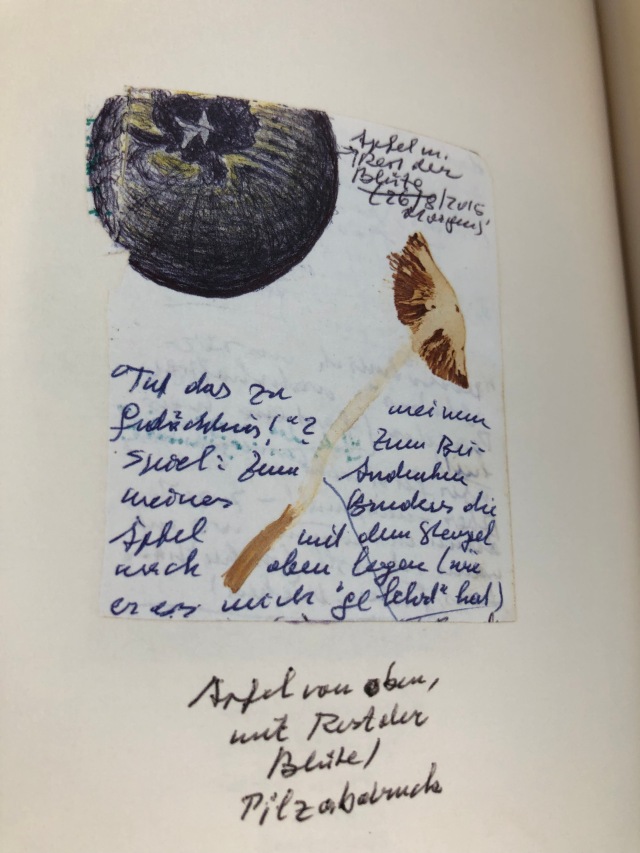 He draws on what he reads, as on these pages from the Greek New Testament: 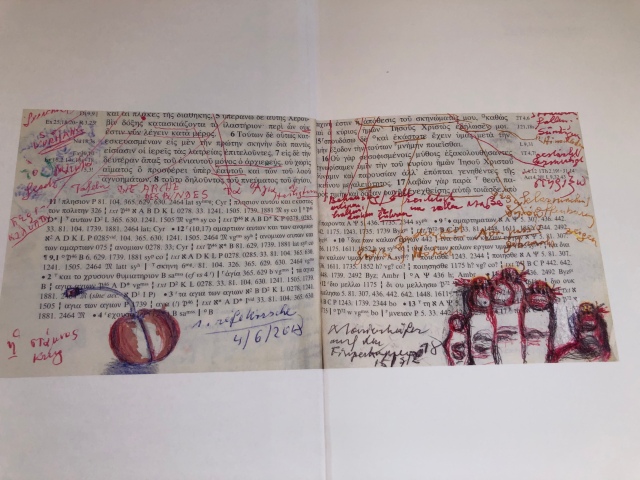 The drawings, like this one of a night-time facade in Versailles, are products of solitary observation, of suspended time: 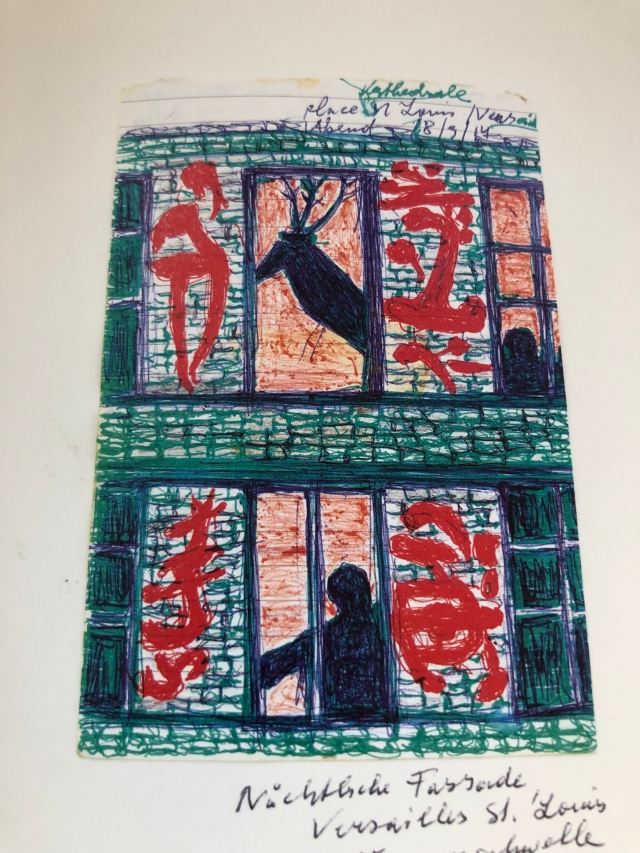 They explore space as well as time: 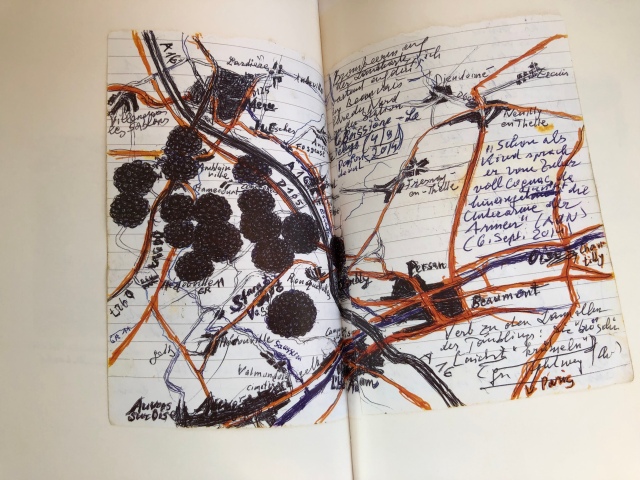 Travel, for me, has always been a time of introspection, of observation, of gathering ideas. My own notebooks are products of travel: 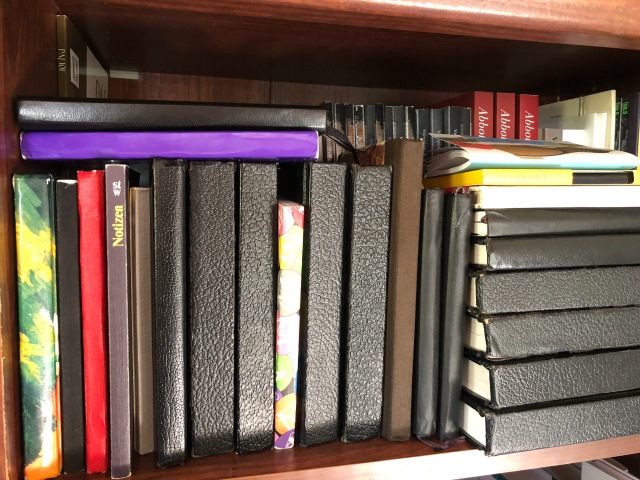 Twice I have left a notebook behind, once after seeing a new film by Wim Wenders in London (when I went back, it was in the theater box office), once after a bus ride from Belgrade to Sabac (miraculously returned several days later while traveling up the Drina River with Zarko Radakovic and Peter Handke — by a man connected with the bus company who fed us a sumptuous dinner of Drina fish). The first notebook contained notes that make up a chapter on standing stones in my book on the standing metaphor, the second with observations that appear in my half of Zarko’s and my book Vampires & A Reasonable Dictionary. The loss of either would have been devastating. Zarko once had a backpack stolen in the Cologne train station at the end of a long trip. He sent me a description of the event by email (reproduced in my contribution to our book We: A Friendship, currently under review by punctum books):

We are back in Cologne. A remarkable trip. Corsica is fascinating. When our hikes were a little precarious I thought about you and Sam and your book [Wild Rides & Wildflowers: Philosophy and Botany with Bikes]. Never in my life have I seen so many wildflowers. We were there at the perfect time, right after the rains. And the weather was fantastic. Not too warm, but beautiful.

So, having survived all the hikes, I was liquidated in the Cologne train station. I was robbed. My backpack was stolen while I was grabbing a bite to eat. Along with other valuables, my notebook disappeared, about 100 pages of my book about passion. Gone forever. It destroyed me. I couldn’t speak for days. I am slowly beginning to contemplate the future, how to continue. A catastrophe. Reason to give up, even living.

And a final image, pages from a notebook used in Vienna, notes about bicycles that entered Sam Rushforth’s and my book Zarko referred to, and notes about Bruegel’s Peasant Wedding, the beginning of an essay titled “A Radical Peasant Wedding” I have just submitted to the journal Art History: 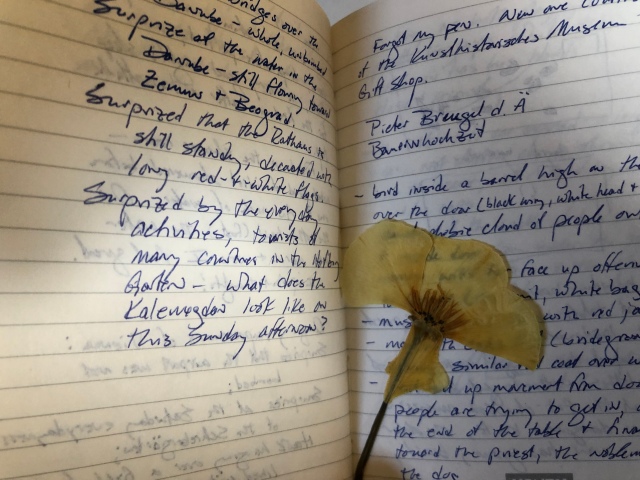 I received my Ph.D. in German Literature from Princeton University in 1979. Then I taught at Vanderbilt University, BYU, and Utah Valley State College. At Utah Valley University, I directed the Program in Integrated Studies for its initial 13 years and was also Chair of the Department of Humanities and Philosophy for three years. My publications include a book on Freemasonry and the German Novel, two co-authored books with Zarko Radakovic (REPETITIONS and VAMPIRES & A REASONABLE DICTIONARY, published in Serbo-Croatian in Belgrade and in English with Punctum Books), a book with Sam Rushforth (WILD RIDES AND WILDFLOWERS, Torrey House Press), a "fraternal meditation" called IMMORTAL FOR QUITE SOME TIME (University of Utah Press), and translations of three books by Austrian author Peter Handke, of an exhibition catalogue called "The German Army and Genocide," and, with Dan Fairbanks, of Gregor Mendel's important paper on hybridity in peas. More famously, my children are in the process of creating good lives for themselves: as a model and dance/yoga studio manager, as a teacher of Chinese language, as an ecologist and science writer, as a jazz musician, as a parole officer, as a contractor, as a seasonal worker (Alaska and Park City, Utah), and as parents. I share my life with UVU historian Lyn Bennett, with whom I have written a cultural history of barbed wire -- THE PERFECT FENCE (Texas A&M University Press). Some publications at http://works.bepress.com/scott_abbott/
View all posts by Scott Abbott →
This entry was posted in Uncategorized and tagged Alex Caldiero, notebooks, Peter Handke's Zeichnungen, Sam Rushforth, Vampires & A Reasonable Dictionary, Wild Rides and Wildflowers, Zarko Radokovic. Bookmark the permalink.