This morning Belgrade’s Politika published Zarko’s first thoughts about the prize awarded to his friend Peter Handke. Here a modified Google-Translate version of the piece: 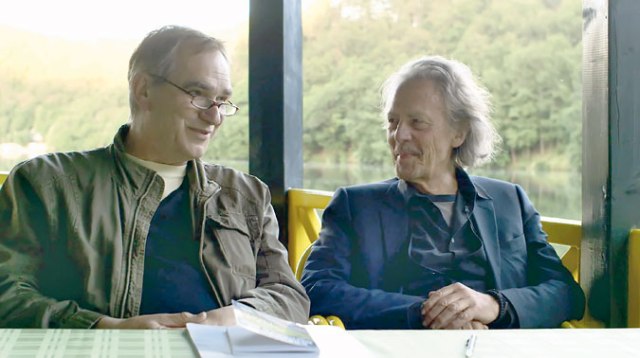 Did I suspect that this time Peter Handke would be awarded the Nobel Prize for Literature? I probably did. Because why would I come in for lunch at noon in the southern part of Cologne that day, knowing that there was a television set on the wall that had been broadcasting current news for years, “like on a conveyor belt”.

As I waited for the ordered food, I stared at the screen and the latest news from the war in Syria; I also saw the latest cultural news from the corner of my eye: “The 2019 Nobel Prize in Literature was awarded to Peter Handke.” At first, I almost didn’t react. The excitement began only after the food arrived; noodles were falling out of my mouth, my hands were shaking all at once; I didn’t feel hungry anymore.

And just as I was about to interrupt my lunch, I saw the first message on the phone display: Paul Ingendaj, Literary Editor of the FAZ daily, a friend, wrote to me briefly: “Great decision by the Nobel Committee in Stockholm; congratulations to Handke, but also to you. ”

And I became aware of what was happening: it was not a dream. Yes, I reached for the phone, and immediately called Handke; but could not be reached at that moment. Instead of Peter, another friend came forward: Norbert Wehr, the publisher of probably the most reputable German journal for world literature Das Schreibheft, for which only a few years ago Peter Handke and I put together a topic on Serbian literature. Congratulations again to Peter, but also to me, and I returned the compliment, because both Norbert and I have done much in defense of Handke’s writings against the threatening political and ideological discourse.

In the wake of all the wide-spread controversy over the role of writers in the production and confirmation of historical facts, there was an increased need for a defense of literature and art. Knowing that “times for poetry are bleak”, as they are for the reception of art at the worst of times, Peter Handke most consistently stayed at his business, writing and translating the most valuable literature of his era.

Is it possible that the age for “clean things” has finally come, I asked Norbert in an interview (which, of course, also had to do with the terrorist’s last assassination at the Hale synagogue). I will not continue to dine. China’s favorite soup will go unnoticed. I’ll pay, get out, and try to call Handke again on the move. After several unsuccessful attempts, on the way home, I decided to send at least a short message to a writer whom I have been translating and writing about for four decades. And I wrote on the move: “I feel happy, but also exhausted, as after a difficult and protracted battle in which literature won.”

It is truly impossible not to remember today all the trouble that writer Peter Handke has experienced in trying to combat the dirty political discourse involved in the arts. By no means do I claim that art is a world “neither in heaven nor on earth”. But no writer, especially this one, can ever, nor should ever be a functionary in a particular ideological, political, or economic system. A great writer is always a resistance to a general, established, and especially unverified opinion.

Peter Handke is – undoubtedly, despite all his involvement in the evaluation of his artistic oeuvre, and independent of his own repertoire in his literary work – undoubtedly one of the greatest writers of today. To say, however, even today, after the Nobel Committee’s decision, that he was “a great writer but a bad politician”,  seems like a futile attempt to shift the focus to a field that has nothing to do with the writing business.

These were the words of some critics who, on the day of the award, gave this writer an attempt to address his value and even the jury’s decision. Because Peter Handke has long since deserved the Nobel Prize in Literature (just as Tolstoy, Ibsen, Strindberg, Proust, V. Wolff, Joyce, Kafka, Borges, Nabokov and many others deserved it).

And then came the burst of calls from friends from all sides, those who knew well about my obsessions with my heroes, including Peter Handke. My walk home was interrupted by shorter or longer calls: Branko Cegec, Nenad Jovanovic, Miroslav Kirin, Marjan Cakarevic, Sanja Nikolic, Branko Novakovic, Zermial Civikov. Perhaps the favorite words were from a translator of some of Handke’s books and my co-author, American Scott Abbott.

And again several unsuccessful attempts to summon the writer. In the evening, I heard on the news that in the middle of a meeting with reporters, he went outside and wandered around the forest in the suburbs for a long, four hours. The same trajectories described in all his books, in the book The Afternoon of the Writer, for example, in the books My Year in the No-Man’s-Bay, Image Loss, The Moravian Night, The Great Fall and, of course, The Fruit Thief. It was not only the author’s consistent distancing from all noise but also measures to protect the literary world, a condition for the continuation of “pure creation”, and for the salvation of the following reading. For Peter Handke, I am sure that even this award will not interfere with his magnificent work. Two new books have already been announced.

I received my Ph.D. in German Literature from Princeton University in 1979. Then I taught at Vanderbilt University, BYU, and Utah Valley State College. At Utah Valley University, I directed the Program in Integrated Studies for its initial 13 years and was also Chair of the Department of Humanities and Philosophy for three years. My publications include a book on Freemasonry and the German Novel, two co-authored books with Zarko Radakovic (REPETITIONS and VAMPIRES & A REASONABLE DICTIONARY, published in Serbo-Croatian in Belgrade and in English with Punctum Books), a book with Sam Rushforth (WILD RIDES AND WILDFLOWERS, Torrey House Press), a "fraternal meditation" called IMMORTAL FOR QUITE SOME TIME (University of Utah Press), and translations of three books by Austrian author Peter Handke, of an exhibition catalogue called "The German Army and Genocide," and, with Dan Fairbanks, of Gregor Mendel's important paper on hybridity in peas. More famously, my children are in the process of creating good lives for themselves: as a model and dance/yoga studio manager, as a teacher of Chinese language, as an ecologist and science writer, as a jazz musician, as a parole officer, as a contractor, as a seasonal worker (Alaska and Park City, Utah), and as parents. I share my life with UVU historian Lyn Bennett, with whom I have written a cultural history of barbed wire -- THE PERFECT FENCE (Texas A&M University Press). Some publications at http://works.bepress.com/scott_abbott/
View all posts by Scott Abbott →
This entry was posted in Uncategorized and tagged Nobel Prize, Peter Handke, Politika, Zarko Radakovic. Bookmark the permalink.