The Idiot (from Peter Handke’s Die Obstdiebin / The Fruit Thief)

Another couple of steps farther, at the threshold of the square fronting the train station, part of the goings-on, the Idiot of the No-Man’s-Bay. (There have been various others, and there might well have been even more.) For some time I hadn’t encountered him, and had thought he had somehow disappeared. As always, he looped swiftly around, but this time he wasn’t singing and didn’t bend down to pick up trash, accumulated refuse he felt responsible for, if no one else was going to do it. He didn’t recognize me, or didn’t want to recognize me. I watched him move along. He had grown old since the last time, when I bought him a coffee in the Berber Bar and he shouted—when he opened his mouth it was always a shout, and even when he sang, he shouted—, that I was always such a good friend (which certainly was not the case). Old, yet wearing a chic windbreaker and almost new black leather pants, the kind only old Johnny Halliday could manage, and even he only when he was acting as a rockstar on stage. Silently the aged Idiot crossed the square, shoveling mole-like through the air with very white palms facing out, his huge head hanging down, the black leather pants slipping down over his just as extremely white bottom.

I have been reading this recent novel daily, a slow reading I make even slower by stopping to translate a passage here and there.

This description of a man the narrator encounters at the train station is especially vivid. The French “Elvis” indeed wears tight black leather pants in various film clips on the internet. But he spelled his stage name with a “y” rather than the book’s “i”: Hallyday. These things happen.

In his searching “Essay on a Successful Day,” Handke describes a song “that might have been called ‘A Successful Day.’ It was sung by Van Morrison, my favorite singer (or one of them), and it actually has a different title, the name of a small American town that is otherwise of no interest.” The song’s title is “Coney Island” and it’s from the Album Avalon Sunset. Coney Island is off the coast of Ireland, definitely not an American town. I once mentioned the error to Handke. You’re not the first to point that out, he replied with a smile.

One of my own most embarrassing errors is found in my book Immortal For Quite Some Time, a passage about a Mormon apostle excommunicated for extra-marital sex: 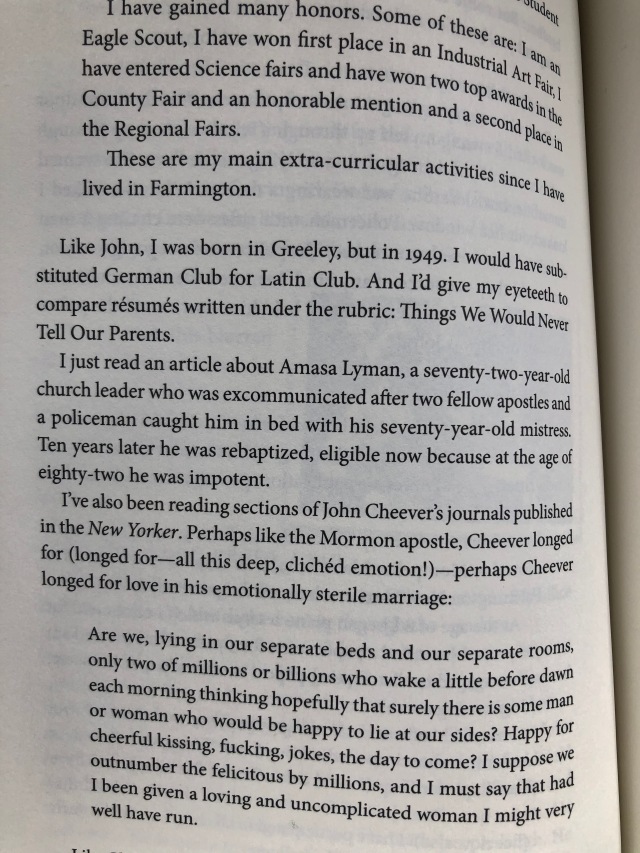 About a year after the book was published, one of my students mentioned that she had read the book and very much enjoyed it. You have a paragraph, she continued, that mentions my great uncle Amasa Lyman. Yes, I said, isn’t that a striking story? It is, she said, but what you describe happened to Richard Lyman, not to my great uncle.

I received my Ph.D. in German Literature from Princeton University in 1979. Then I taught at Vanderbilt University, BYU, and Utah Valley State College. At Utah Valley University, I directed the Program in Integrated Studies for its initial 13 years and was also Chair of the Department of Humanities and Philosophy for three years. My publications include a book on Freemasonry and the German Novel, two co-authored books with Zarko Radakovic (REPETITIONS and VAMPIRES & A REASONABLE DICTIONARY, published in Serbo-Croatian in Belgrade and in English with Punctum Books), a book with Sam Rushforth (WILD RIDES AND WILDFLOWERS, Torrey House Press), a "fraternal meditation" called IMMORTAL FOR QUITE SOME TIME (University of Utah Press), and translations of three books by Austrian author Peter Handke, of an exhibition catalogue called "The German Army and Genocide," and, with Dan Fairbanks, of Gregor Mendel's important paper on hybridity in peas. More famously, my children are in the process of creating good lives for themselves: as a model and dance/yoga studio manager, as a teacher of Chinese language, as an ecologist and science writer, as a jazz musician, as a parole officer, as a contractor, as a seasonal worker (Alaska and Park City, Utah), and as parents. I share my life with UVU historian Lyn Bennett, with whom I have written a cultural history of barbed wire -- THE PERFECT FENCE (Texas A&M University Press). Some publications at http://works.bepress.com/scott_abbott/
View all posts by Scott Abbott →
This entry was posted in Uncategorized and tagged Die Obstdiebin, error, Essay on a Successful Day, Immortal For Quite Some Time, Peter Handke, Scott Abbott, The Fruit Thief, Van Morrison. Bookmark the permalink.