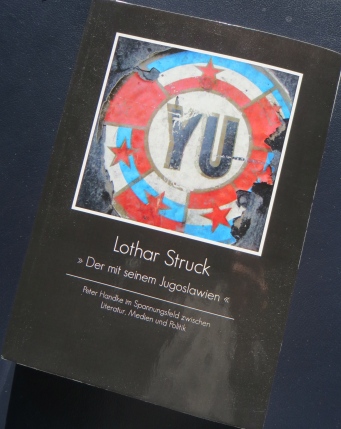 Lothar Struck’s long anticipated book on the tensions between literature, media, and politics in the work of and about Peter Handke took me by surprise.

These are works I know very well.

I have translated two of Handke’s Yugoslavia texts, the fine and controversial A Journey to the Rivers: Justice for Serbia (Viking) and the remarkable play Voyage by Dugout: The Play of the Film of the War (PAJ, Performing Arts Journal).

The final chapter in the Companion to the Works of Peter Handke (2005) is my essay “‘That sweet And so on’: Peter Handke’s Yugoslavia Work”

(you can read a version of that here, and other works on Handke are at the same general site: http://works.bepress.com/scott_abbott/22/)

Struck generously thanks me for support while he was writing his book and he cites some of my work.

So why does this book surprise me?

Because it contains so much that is new to me.

With his German Gründlichkeit (thoroughness, carefulness, meticulousness), a characteristic I admire but often lack, Struck has, most importantly, done what most critics of Handke’s Yugoslavia work have failed to do: he has read the texts and their con-texts (especially Handke’s own work in the decades leading up to the Yugoslavia works). In the course of the book Struck lays out the substance of each text, reporting as objectively as possible, simply stating what is there and only then offering commentary.

In addition, he examines Handke’s actions (like his meeting with Radovan Karadzic) and his statements (like the one he made at Slovodan Milosevic’s funeral) and various interviews on the subject of Yugoslavia.

Less important for my own taste, but critical for the purposes of this book, Struck also reads and comments on the vast literature that has gown up around this part of Handke’s work over two decades.

Although Struck takes Handke to task, especially for an occasional lapse into what Struck sees as the same rhetorical tendentiousness Handke attacks in the media, the book is for the most part a careful defense of the author on the basis of Handke’s critique of language (present in all his texts since the very beginning), a critique that Struck argues (and I fully agree) is a fundamentally political act.

This is a big book, bristling with information and analysis, and I’ll not try to recapitulate it here.

I’ll end with my favorite sentences from the book (which I won’t translate, other than to note that they attack the current public sphere in German with phrases like “crude zones of titillation” and “totalitarian base” and a “rhetorical Jacobinism of self-satisfied guardians of meaning”:

I received my Ph.D. in German Literature from Princeton University in 1979. Then I taught at Vanderbilt University, BYU, and Utah Valley State College. At Utah Valley University, I directed the Program in Integrated Studies for its initial 13 years and was also Chair of the Department of Humanities and Philosophy for three years. My publications include a book on Freemasonry and the German Novel, two co-authored books with Zarko Radakovic (REPETITIONS and VAMPIRES & A REASONABLE DICTIONARY, published in Serbo-Croatian in Belgrade and in English with Punctum Books), a book with Sam Rushforth (WILD RIDES AND WILDFLOWERS, Torrey House Press), a "fraternal meditation" called IMMORTAL FOR QUITE SOME TIME (University of Utah Press), and translations of three books by Austrian author Peter Handke, of an exhibition catalogue called "The German Army and Genocide," and, with Dan Fairbanks, of Gregor Mendel's important paper on hybridity in peas. More famously, my children are in the process of creating good lives for themselves: as a model and dance/yoga studio manager, as a teacher of Chinese language, as an ecologist and science writer, as a jazz musician, as a parole officer, as a contractor, as a seasonal worker (Alaska and Park City, Utah), and as parents. I share my life with UVU historian Lyn Bennett, with whom I have written a cultural history of barbed wire -- THE PERFECT FENCE (Texas A&M University Press). Some publications at http://works.bepress.com/scott_abbott/
View all posts by Scott Abbott →
This entry was posted in Uncategorized and tagged Der mit seinem Jugoslawien, Lothar Struck, Peter Handke, Yugoslavia. Bookmark the permalink.